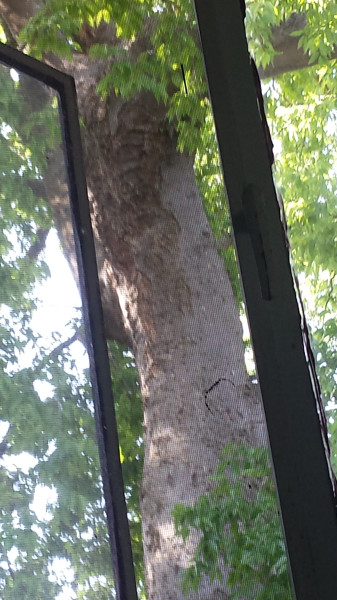 The Hackberry tree in summer 2015, through my open childhood window

It's been just My Tweets here for quite a while!

My parents declined and died...and I'm still retired. But now I'm free to travel with my tortoiseshell colleague.

The folks' decades-long, steady but gradual at first, then faster, then ever-more rapid relentless demise through cascading old-age-related afflictions became and remained my full-time job and nightmare for nearly a decade, their final decade.

But I might live one more, maybe even two, and I'm resolving to live as well as possible.

Lately, I've been looking back, while going forward, driving or flying to and from Wisconsin, exploring new destinations around the USA, recalling in a jumble the blurs and highlights along my life's detouring path, so far--the synergy of fun, pain and learning.

My sister and I made no headway over those years improving the folks' steadily more and more chaotic state of affairs--as a last-ditch measure, we called Dane County adult protective services, but that agency was just beginning to open a case when the inevitable middle-of-the-night, life-changing disaster struck. Our mother's hospitalization in December 2015 then triggered many changes for the better, at least as far as safety and comfort go.

RIP1 - 2016 - Our mother's end-of-life: She died in October 2016, 92 years old, almost exactly six months before her husband, our father, while residing in Capitol Lakes Terraces, a POSH assisted living facility in downtown Madison, Wisconsin she chose. This was after a go-round in rehab there, after he put her in the hospital, just past midnight in mid-December 2015 because his dementia symptoms had escalated into violent aggressive outbursts after most sundowns. So, after her broken ribs had mended enough, she opted for safety, but her health declined rapidly thereafter.

Leading up: Despite drastically deteriorating conditions at home, our mother, growing very frail, yet still well able to demonstrate her own mental competence alongside our father's worsening dementia, had hotly refused to budge from this familiar, yet increasingly distressing and dangerous predicament, despite my sister's and my offers to facilitate safer, healthier solutions, with or without our father's cooperation (and healthier, safer solutions for him too, of course).

After hospitalization and rehab: Our mother lived her remaining months in her ideal mini-apartment, surrounded by all her favorite artwork and treasures we'd gathered from both the Davis, California and Madison, Wisconsin houses, with dedicated, well-qualified "resident assistants" providing impressive, skilled-nursing-level care (just under non-medical terminology because of the setting--most were nursing students, others had years of experience and/or CNA credentials and they provided all types of care, as needed, under an RN's supervision, individualized to each resident). After a few months, this exceptional care was augmented by Agrace Hospice services--more institutional than Heartland Hospice, a company I prefer that supported our father's dying later, but suitable in that assisted living environment.

RIP-2: Our father was controlling enough that he just had to die just past midnight, exactly on his 98th birthday in 2017 when that date, April 16, fell on Easter! An exceptional flourish is in character--he often claimed to be an exception to whatever rules Life On Life's Terms naturally, universally rolls out. But, despite his super-brainpower, poetic romanric heart, and generous sense of humor, ultra-privately, a lifelong compulsive worrier, he lived an increasingly brittle, anxious, fuming, PTSD'd life, despite much bluster, more and more often triggered into sweating much "small stuff" and some bigger stuff, both alike. Having grown up during the Great Depression, then flown a full tour of heavy bombing raids out of Foggia, Italy during WW2, as a B-17 crew member (Radio Operator/Gunner), like probably many others of his generation, he certainly suffered unrecognized, untreated PTSD, and maybe other traumatic brain injuries besides. So, to cope with those ongoing torments his way, he strived to overachieve, and largely he suceeded, while white-knuckling it took its heavy health toll, year by year.

And yet: Our father's end-of-life turned out okay, better than expected, after all: At his beloved Madison, Wisconsin house, Comfort Keepers caregivers, starting January 2016, with support from Heartland Hospice, joining in March 2017, gave him the best possible last year-and-a-half of his life--days of mostly carefree, nearly stress-free moments, full of pleasant dreams, drives along local memory lanes, and giant bowls of Neapolitan ice cream. "There's nothing to do, all has been taken care of!" were the magical, comforting words that allowed him to respond, again and again, "Wow...That's wonderful!"

After the crisis: Our father refused to move from his house, even to join our mother in assisted living, and could afford 24/7 home care, so he stayed put. He visited her at Capital Lakes Terraces once per week for an hour at most, supervised by me and his favorite caregiver, about as much as he could tolerate physically, and the dementia had taken his sense of timing, anyway. When he died in his home, as he had long-wished, under the best of care, resting, sleeping and dreaming on the hospital bed that had been set up in his livingroom so he could look up at the lush greenery of overhanging maple trees all around his property, he seemed deeply relaxed, at last. The caregivers had even brought in a huge, laid-back, super-friendly, playful orange tabby for companionship--"Finally, another man in the house. That's wonderful!"--who appeared to enjoy soaking up extra attention and watching over the backyard wildlife during his extended visit, with a countryside forever home at one of the caregiver's to return to.

Déjà vu and more: I visited both parents on two restful Saturdays, October 15 and April 15, prepared, both afternoons, to return the next day, but both died in their sleep overnight, each upon their apparently chosen, transformational Sundays (as both, lifelong Episcopalians, would think of all Sundays, and especially Easter Day).

Unfortunately, even putting the best spin on events: Our parents' last decades were increasingly disorganized and distressed--more and more turmoil, less and less fun--but they refused appropriate assistance, retaining every right to do so, until dire circumstances led to the crisis that forced comfort and safety upon them.

Before and after the folks entered assisted living and home health care, the ongoing managing of many details of their lives and properties became and remained my full-time volunteer job. Having cultivated, since adulthood, a simplifying, low-overhead lifestyle, I could just afford to retire early on Social Security to do this because for decades I'd worked diverse freelancing and odd-jobbing gigs alongside steady, fun (for me), manual (often so-called unskilled) blue collar employment. Before summer 1998, when I suddenly quit professional social work when I realized in an aha! flash I disliked it, I performed communty, clinical and administrative roles, usually full-time for nearly two decades in Milwaukee's inner city, while earning an MSW degree, and the LCSW credential next (which remains current, under "permanently retired" status that could be reactivated).

All those higher- or lower-paying earning quarters reckoned into the SSA's retirement benefits formula, adding up to just enough. Though I intended to semi-retire at first, attending to the folks zapped most of my energy and hours.

My sister, still full-tme employed professionally as a school teacher, with much better retirement benefits held hostage, helped as much as possible from a distance, flying in for holiday and summer visits, even while she was dealing with her own husband's early-onset severe dementia, and then his dying and death, As soon as she could afford retirement, she stepped up to do even more than her share near the end of the folks' lives, then beyond, into the red tape that came after.

This near-decade-long situation was, I believe, for both of us, discouraging and exhausting. Earlier on, for me, it proved traumatc and soul wounding, but I'm mending. Still, we volunteered, have no regrets (we've agreed) and experienced (I've understood all along) far better circumstances than many families dealing with aging relatives.

We were especially fortunate that sufficient funding for the highest level of care for both parents was available--before the chaos set in, the folks had planned ahead that way, expertly indeed. Finally, once the hospitalization crisis forced (grudging and kicking) acceptance of care, at our mother's request, and then under Power of Attorney, we did our bests to fulfill their end-of-life wishes.

Well, for me this ordeal is over physically, and I feel immense relief to this day, while wondering on what more I would do well to learn from this transforming phase of my life-journeying, and the learning will be ongoing, no matter what.

So now: What about me and my tortoiseshell companion these days? We're Wisconsin residents with connections to Madison and Greater Milwaukee, still. But we're jaunting around the American Southwest, drinking in sunnier, drier views.

Posts from This Journal “next” Tag

Comments for this post were disabled by the author